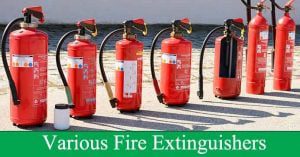 Fire accidents are a common occurrence. For a fire to exist, four elements must be at work; oxygen, heat, fuel, and a chemical reaction. Oxygen is the element that sustains combustion, while heat makes it possible for the material to reach its ignition temperature. Fuel supports the combustion, and the chemical reaction ignites the other three elements.

It is essential to be aware that there are different classes of fire, caused by various types of fuels. Each type of fire requires its corresponding fire extinguisher to put it off effectively. To understand which extinguisher can be used for which kind of fire, it is crucial to know how fire is classified.

Given the above classes, here, then, is a list of the common types of extinguishers.

They are the most common type and are used to put off the Class A type of fire. The water-based extinguisher should not be used on class B or C as the discharge stream could make the flammable liquid in class B spread or create shock hazard in class C. The extinguishers quench the fire by taking away the heat and oxygen element from the fire. The foam extinguisher should be used on class A and B fires but will create a shock hazard if used on Class C fires.

They extinguish fires by taking away the oxygen and heat elements with a very cold discharge. The extinguishers are ineffective on Class A fires, but can effectively be used on class B and C fires.

They work by blocking the chemical reaction of the fire. It is the most widely used type of extinguisher because it can efficiently put off Class A, B, and C types of fires. It also creates a blockage between the fuel and oxygen elements in Class A fires.

The ordinary dry chemical extinguisher can only be used for Class B, and C fires only.

Using an extinguisher for the wrong type of fire can make the fire re-ignite after what appears to be successful extinguishing.

It is a new type of extinguisher that works by inhibiting the heating element and preventing re-ignition by obstructing the fuel and oxygen elements. The Wet chemical extinguishers were developed with deep fat fryers used for commercial cooking purposes in mind. Some of them can be used to put off Class A fires in smaller commercial kitchens.

They are also known as halogenated extinguishers. They contain halon and halocarbon agents, which work by removing the heat and chemical reactions from the fire. This type of extinguisher is useful for Class A, B, and C fires although their smaller versions are not very useful on Class A fires.

They are similar to the dry chemical ones, but how they work is what makes the difference. The dry powder type works by separating oxygen from the fuel or by removing the heating element. Kindly also note that they are used for Class D fires and combustible metal fires only and are ineffective for other classes of fire.

They work by interrupting the chemical reaction element of the fire and are useful for Class A, B and C fires. It also creates a barrier between the oxygen and fuel elements on Class A fires. Please note that ordinarily, dry chemical extinguishers are for Class B and C fires only, and their wrong use can cause a fire to re-ignite.

Fire extinguishers are must-have fire safety gear. Every home or office should have it. Along with it, get a fire escape ladder as well. 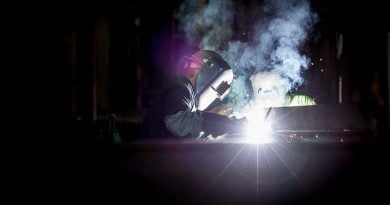 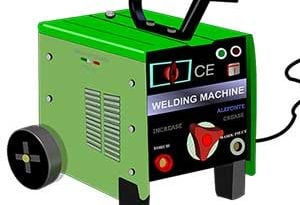 How To Wire a 220 Outlet For A Welder Safely? 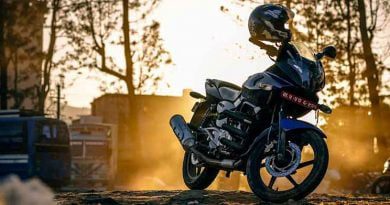